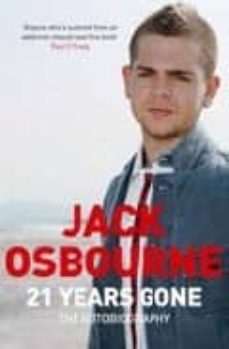 When he was sixteen, Jack Osbourne's life must have seemed like a teenager's dream. The son of superstar Sharon and legendary rock star Ozzy, he was a celebrity thanks to The Osbournes, living in LA and hanging out with musicians. But, behind his outrageous on-screen antics, Jack was hiding a serious problem - an addiction to alcohol and prescription drugs. In "21 Years Gone", Jack writes with brutal frankness about his descent into addiction, a terrifying downward spiral that began when he was twelve. He describes his escalating drug use and the low point he reached when Sharon was diagnosed with cancer. Scared by her illness, hating who he was, he prayed to God to take his life. Finally, he had reached rock bottom and knew he'd die if he didn't reach out for help - and so began the long process of recovery. Today, Jack is a sober, fit young man with a newfound passion for extreme sports and his own television series. By turns funny, disarming and moving, "21 Years Gone" is the powerful story of a young man who has confronted his demons and defeated them.