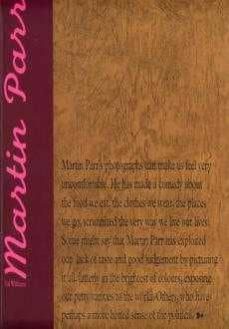 Martin Parr The first comprehensive monograph charting the career of the Magnum photographer.Edited and written by Val Williams The first comprehensive monograph charting the career of British photographer and collector Martin Parr (b.1952), best known for his frank chronicling of British life Features early black-and-white photographs of the 1970s and previously unpublished work, in addition to his most famous projects, including The Last Resort, The Cost of Living and Signs of the Times Extensive interviews with Parr explore his position as a contemporary artist as well as documentarian of popular culture and consumerism Includes an appendix illustrating many of Parr's famous collections, from wallpaper to lapel badges and souvenir modelsThis Martin Parr (b.1952) retrospective is rich in the wit and colour for which Parr's work is well known, yet simultaneously offers the first ever serious assessment of the career of this major contemporary photographer. Parr combines an urge to document with an attitude of incisive bemusement by social behaviour. Val Williams, distinguished writer and curator, considers Parr's later work - also his most famous - within the context of his full career. In so doing, she shows how Parr's subtle and striking photographs have highlighted political and social change over the last 30 years. Although Parr began his career in Britain, he now has a wide international following. This book offers the overview that many have eagerly anticipated. It features fascinating previously unpublished early work, his startling and original 1974 installation 'Home Sweet Home', early black-and-white photographs of the people and places of Hebden Bridge, Yorkshire where he lived and worked in the 1970s, photographs from Ireland and Salford, and of course a selection of the very best images from all his published books including The Last Resort, The Cost of Living, Signs of the Times and Think of England (published by Phaidon). With unlimited access to Parr's archives and drawing on extensive interviews, Val Williams charts Parr's life and career, revealing insights into his influences and attitudes and assessing his importance within the worlds of art and p